Can Men and Women JUST Be Friends?

Good afternoon LOVEanese! Before I get into my topic, I just wanted to share two things. The first is a picture that I took in downtown Beirut:


The second is a really cool article that I saw in the AUB Main Gate magazine today: 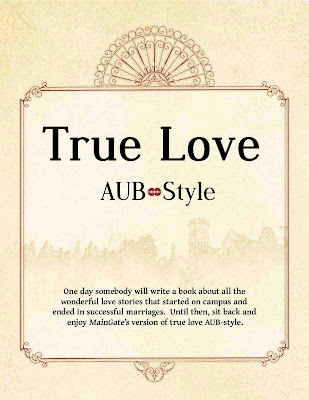 It says "One day somebody will write a book about all the wonderful love stories that started on campus..." I sent them an e-mail telling them about my thesis and said, "I'm already way ahead of you!" :)

So, now, on to what I wanted to blog today about something I've seen going around Facebook and Twitter, and I figured now's a good time to talk about it since it's fresh in everyone's minds. There was a really cool video posted recently about whether men and women can be friends or not (the general rule being that they can't be friends). Basically, these two independent filmmakers went around and asked male and female students at Utah State University in America if they can be just platonic friends with someone from the opposite sex. You can check it out here:

Pretty powerful huh? More recently, this study (as reported in Scientific American) affirmed the validity of the pseudo-experiment conducted above. Well, in case you don't know, however, they weren't exactly the first to point this out. Hollywood has long purported this as "fact," and the person who is best known for making this idea famous was Harry from When Harry Met Sally (one of my favorite movies), and Oscar Wilde touched on it before as well in Lady Wildermere's Fan. Here's the famous scene from When Harry Met Sally:


So, that's what got it all started, and frankly, he may have a point. A lot has been written on the topic since as well. Before I get into whether or not men and women can enjoy platonic friendship, let's think about what's going on when two people want to be friends. As this author argues, basic platonic attraction comes out of sharing similar activities, values, communication styles, etc. that allow them to spend time together. So as individuals do things together that they both like, they often become friends. The article also has some great advice from relationship authors and scholars who have more to say about it (this podcast has a lot of great information too).

Some other really good articles and resources that talk about this are this one, this one (provides some examples/anecdotes), this one, and this one. In fact many people have tried to comment on this such as Chris Rock who has some wisdom and insight to share.


So, CAN men and women just be friends? The majority of the research so far actually says yes, they can be, but with conditions and rules. This author writing for Psychology Today (which has some really great resources) sums it up well:

"The point is that the majority of people believe friendships between the sexes is possible. The majority of people, I suspect, also know what their own parameters are and when those friendships are safe as friendships and when boundaries might be crossed. In that case, the friendship is at risk, and a marriage or partnership (if one of the friends is in one) may be in jeopardy.  I return to the need for transparency.  Know enough about yourself to understand when a friendship is possible and when you are being friendly with the hope of developing a love relationship -- the latter happens when you are physically as well as emotionally attracted to someone. There is no right or wrong way to do this but being honest with yourself (I admit I am being nice to this person in the hopes of getting them to like me) may prevent confusion and hurt feelings down the road."

What do you think? Can they just be friends? Let me know if there's anything else I can expand further (I don't mind editing this (or any) post(s)).