The Art of Slow Dance

Saba7o/namaste LOVEanese! I'm really excited to post so soon again. Thanks so much for all of your wonderful comments on my last post, I really appreciated how well-received it was. This post is going to be a bit of a quickie. I just want to start by saying that I encourage you to check out my older posts (especially if you're a new reader). I update them often with new resources. I recently did that for this post about body image and its connections with relationships, as well as this one about love, relationships, and technology.


I also have some recommended reading for you for this week (which I always post to the LOVEanon Facebook Page as well):

1. The first is an op-ed article out of the New York Times offering research and statistics about why Men Need Women. Basically, it discusses, for instance, how when men become fathers of baby girls, they tend to take on certain feminine traits like understanding and empathy. And this also manifests in different aspects of their life (such as their work).

2. The second is a series of photos from BuzzFeed titled, "Pictures That Will Make You Believe in True Love." It's really warm-hearted, and incredibly cute.

Now, on to the post itself. This past Thursday, I went to the Hard Rock Cafe here in Bangalore for a live show. My friend is the bassist/lead singer for the band One Night Stand, and put on a great show. After the show finished, the DJ put on hard rock music (as you'd expect), and at one point, he put on a slower song. I can't remember exactly which one it was, but I went over to my friend Theresa, and asked her to dance with me. It was so nice to dance again with someone--and the right way. It was in that moment, I began to think a lot about the "art" of slow dance.

For those unfamiliar, Wikipedia says it well:

"A slow dance is a type of partner dance in which a couple dance slowly, swaying to the music. This is usually done to very slow-beat songs. "Slow dancing" can refer to any slow couple dance (such as certain ballroom dances), but is often associated with a particular, simple style of dance performed by middle school and high school students. When two partners dance together, the lead partner typically holds their hands against the sides of the following partner's hips or waist while the follower drapes their hands on the leader's shoulders. The couple then sways back and forth with the music. Foot movement is minimal, but the pair may use their feet to slowly turn on the spot. Because the dance requires little physical concentration, participants often talk to each other while dancing. Some couples who have a close relationship may dance very closely together, in a "hug-and-sway" fashion. Slow dancing is often considered to be just hugging and swaying, rather than an actual dance. This simple form of slow dancing is common at dances sponsored by schools or by religious organizations, such as churches or synagogues."

If you grew up in the U.S. (and maybe Canada, for instance), you generally associate slow dancing with middle/high school and embarrassment because "in Western popular culture, slow dancing can serve as a symbol of adolescent social awkwardness.

Luckily, as you get older, you generally develop your dance skills a little more, so that it (hopefully) becomes more like this: 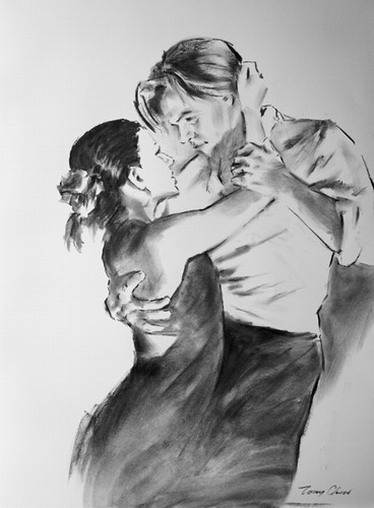 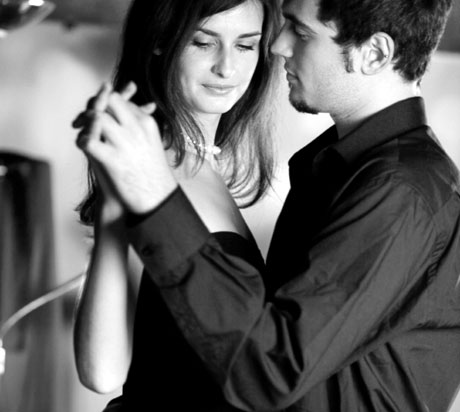 It really doesn't matter if you're in a regular dance club/discotheque in Beirut, Bangalore, Berlin, or Boston, chances are, you will never hear "slow dance music." You have to go to a jazz club, or a special music night in order to hear it. And when we imagine those things, except for the few young people who may appreciate it or think it's cool, most of those events are thought of as being for middle-aged and older people.

Historically, the concept of slow dancing came out of ballroom dance, specifically, the waltz (which, apparently, when it debuted, was a very racy and scandalous dance because it involved two individuals being very close together--at least when compared to how people normally danced at the time (think Pride and Prejudice)). Obviously, dancing has come a long way since...

Wait a second here... let's think about this. How can "bumping and grinding" be perfectly OK (socially-speaking) in most clubs in the world today, but when it comes to taking someone by the hand, holding them close, and swaying with them, that's largely absent from the general dance environment/scene? Sure, they played love ballads at prom in high school, but after you graduated, it basically stopped. As if it was society communicating to you that the hard part's over, and you won't have to do that again until you attend a wedding in your mid-to-late 20s.

Let's think about this. As you know, I've mentioned how much I like slow dancing in the past, and even documented one of my slow dance experiences, so perhaps I'm a bit biased. But, regardless, I think this general lack of affinity for slow dancing comes from two key places. The first (as high school demonstrated so clearly) is that no one ever really teaches you how to slow dance. If you're lucky, you pick it up over time, or see someone who knows what they're doing (professional dancer, parents, family, etc.). And I honestly don't think people really do know how. Luckily, there's this nifty thing out there called the Internet.


Thankfully, there are all kinds of great tutorials for how to properly slow dance online. This one from WikiHow is really great (and has pictures too). If that's not good enough, head over to YouTube. There's many good instructional videos (if not perhaps a bit under enthused), including this one and this one.

Taking into consideration the fact that often, we're not taught how to slow dance, coupled with the awkwardness and the embarrassing memories generally attached to slow dancing, perhaps it's understandable why a 20-something who's had a few drinks at a club doesn't want to necessarily start swaying (although they might by the time they're trying to go home). But that's not enough for me, I want to go deeper. I think it also connects to a topic I've blogged about before that is especially applicable/relevant to people younger than 35: the fear (and general avoidance) of intimacy. Slow dancing is incredibly intimate, especially if you do it right. Your faces touch, the music is sweet and romantic, you're very close together, you can almost feel the other person's chest moving up and down when the tip of your nose grazes past their cheek. Ya Allah! It's incredibly intimate. Yet, I don't think that's the kind of feeling most people either go out in search for, or want period. Maybe I'm conflating two unrelated things. But even though "grinding" has proximity and a hypersexual-nature, it's not necessarily intimate--and I would argue is often quite shallow. It's amazing to me how it's become so easy to ask someone to rub their ass on you, but asking a girl or guy to slow dance with you is tantamount to being asked to go to the moon without a space shuttle. It's both almost impossible AND undesirable.

Thus, awkward memories, a lack of education, and a fear of intimacy may all play a part in why slow dancing is largely a lost--but not forgotten--art.

And with all that said, I want to encourage you to slow dance. Even if it's not at a club or B018, or Sky Bar, or whatever, dance. Find someone who will appreciate it, appreciate you. Put some nice music on, light some candles, and spend the night swaying together. THAT is romance, and is easy to make.

Oh, you don't have good music? Not an excuse. Not anymore anyway. Go to 8Tracks (here's a great one), go to Last.fm, go to SoundCloud, go to TuneIn, go to iHeartRadio, go to GrooveShark, go to Pandora, go to Spotify, go to iTunes, go to Google Play, go to YouTube, go to MySpace even! Do a Google search! Here are some of my favorite songs that I recommend, a little old, a little new, some you'd expect, others you wouldn't. Many are in English, but some in other languages (including French, Spanish, Hindi, and Arabic) (in alphabetical order by artist):

If all else fails, just stick to Michael Bublé, Frank Sinatra, Norah Jones, and smooth jazz. You'll never go wrong with them.

What do you all think? Do you agree or disagree with my arguments? Think I'm forgetting something? Let me know what you think! Also, let me know your favorite slow songs. I'd be happy to add them to the list (it's definitely not an exhaustive one).

Spread the love (and slow dance some more),
-Ogie, MA

P.S. Get ready for an exciting announcement at the end of this week!
Posted by Michael J. Oghia at 2:21 PM